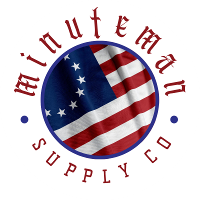 ⁣Owner Pearle is the woman behind the madness! After getting out of the United States Navy in 1999 she began her journey into the firearms world. She officially broke into the industry in 2008 and became an NRA Certified Instructor in 2012. Having worked with mostly ladies and children in the past she looks forward to expanding her reach to help all people with their firearm and emergency preparedness needs. ⁣

⁣⁣Alex is our resident outdoor enthusiast and Marketing Manager. She grew up camping, hiking, fishing, and is a regular shooter. With a background in digital marketing and event coordination, she’s ready to tackle the task of helping to grow Minuteman Supply Co. ⁣⁣Her interests include ethnobotany, homeschooling her children, and prepping for emergency survival situations. ⁣⁣

⁣⁣⁣Matt is a brand ambassador and our resident survivalist. Matt spent 20 years in the United States Marine Corps holding multiple MOS’s (Job specialties). ⁣During his time in the Marine Corps he had the “glorious” opportunity to deploy over 9 times to multiple combat zones spanning a vast majority of the Middle East and Central America. Matt has had the distinct opportunity of operating with conventional, non conventional and government agencies throughout his career and is now in the lucrative world of contracting. Through his experience he has had the opportunity to garner a unique span of survivalist, prepping, and training as well as counter surreptitious entry training (extensive lock picking and breaching) which he enthusiastically seeks to share with the Minuteman Supply Co family as we grow.